For those of you not familiar with The Steam Factory, our purpose is to promote interdisciplinary collaboration in the OSU community across the areas of Science, Technology, Engineering, Arts and Math. To disseminate research, technology and pedagogy through public interaction and to create new ways in which our work can impact a broader audience. Brownie In Motion was actually constructed  with budgetary support from an Outreach and Engagement Grant that the STEAM Factory wrote together.

It’s not too late to contribute to the indiegogo campaign! There are 8 hours left so quickly click your way over to  https://www.indiegogo.com/projects/brownie-in-motion/contributions/new and donate now!

I’d like to thank my friend Undine Brod for supporting the Brownie In Motion project on Indiegogo (https://www.indiegogo.com/projects/brownie-in-motion) .

Undine is a very talented artist in her own right! Please check out her ceramic work at http://www.undinebrod.com/

Hats off to James Chen for his generous $150 donation to the Brownie In Motion campaign! Thank you so much my friend! Your enthusiasm, positivity and continued interest in this project is a blessing!

get on your bike and ride!

This past weekend, I had the pleasure of participating in the Ohio Camera Collectors Society (OCCS) Show and Sale on Saturday, May 17 at the Aladdin Shrine Center.  The club’s president, Daniel Hausman, has been following the camera obscura project since the very beginning and was kind enough to invite Brownie In Motion to their event.

Little did I know,  the Kodak Brownie Target Six-16 camera  holds a special place in the hearts of OCCS members, who, in the year 2000, designed and produced a Millennium edition of this camera. Only 100 of these commemorative cameras exist, which honor the 100th anniversary of the Brownie and the start of the new millennium.

For more information about the Ohio Camera Collector Society, check out: http://historiccamera.com/club/occs/

Also, be sure to check out the Brownie In Motion campaign on Indiegogo. Considered donating to the cause and please, please share!

A thank you shout out goes to Derek Stewart for supporting Brownie In Motion! Be sure to check out Derek’s show Portals happening at Rehab Tavern  through the month of May! 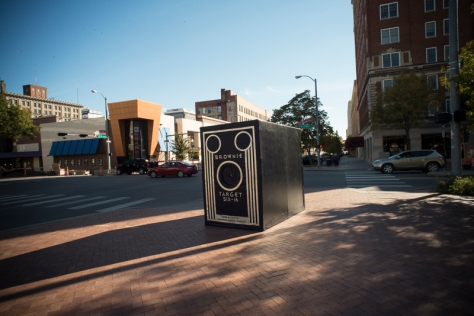 The Brownie and I will be at the forthcoming 400 Festivus event happening this Saturday December 14 at 400 West Rich Street Studios in Franklinton from 11 – 6pm. Come by, say hello and be sure to check out work of my colleagues from The OSU STEAM Factory!

Heather G-O. and Family! I’m offering $25 off of tintype bookings at my studio until tomorrow with the coupon code: SBS2019. You can book via my bio link or by dm-ing directly! Happy Monday!

< Previous Next >
+ Add your own event Eventbrite